At the age of 94, Prof. Uzzi Ornan continuing his lifelong ongoing struggles for upholding the Secular and Democratic image of the State of Israel with his last endeavour to establish and secure Civil Burial rights where he lives.

During the second year of my studies at the School of Film and Television at Tel Aviv University, I was asked to prepare a documentary about a human figure. The choice of Uzzi was immediate. Uzi lives next door to my family in Nofit, a communal settlement in the north of the country where I was born and raised, and therefore my acquaintance with Uzzi goes back to my early childhood. Uzi's well-known name in our community as an elderly man with radical ideological concepts has always intrigued me, but for various reasons I never tried to deeply explore these concepts. Following the demand for an exercise on some character, I came to Uzzi with the camera in an attempt to understand his political views and to become familiar with his long public struggles related to the resistance to religious coercion in Israel. Although I see myself as a person with a broad political consciousness, Uzzi's views went beyond the familiar political concepts and I was exposed to the unique "Canaanite" ideology that reshaped for me what I knew about the State of Israel as a "Jewish State". For more than two years since that first time, when I met Uzzi with the camera, I accompanied him at various cross-roads and moments along his struggles for secular burial and for the future character of the community in which he and my family live. More than anything else, I was amazed and gripped by his ability to preserve the fire and intensity of his struggles for so many years, out of absolute faith in the justice of his path, without letting the powerful winds of resistance blowing around him to stop or divert him from his way. In my last years I felt that a certain growing up had taken place, which also included a degree of skepticism about the real possibility of far-reaching changes in shaping the future path of our State. Following my encounter with Uzzi, a 95-year-old active revolutionary, I was re-infected with his youthful spirit and the faith in the power of a stubborn struggle. 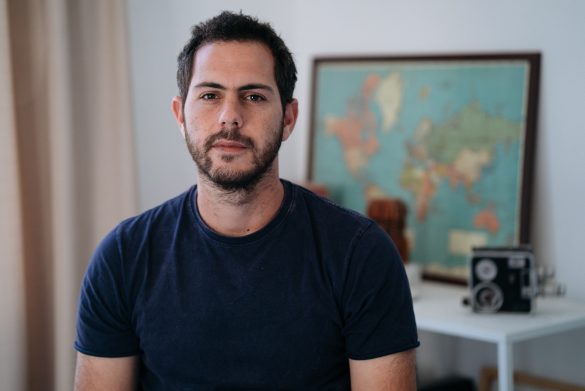 Twenty-nine years old from Tel Aviv, Israel. He was Born and educated in the community village of Nofit, in northern Israel. Graduated from the Steve Tisch Film School at Tel Aviv University and is currently working on his final film. Works as a Cinematographer for short films and various television productions. In 2018, his first two films, "Horah" and "Uzzi" (short documentary films) were screened at Tel-Aviv Student Film Festival. That same year, he made his first short fiction film “Pool." In October 2018, his short film "Horah" was screened at the Haifa international film festival. In March 2019, his film "Uzzi" was screened at the Sebastopol Film Festival, at the Social Relevant Film Festival in New York and the NYC Short Documentary Film Festival.